In September 2009 we purchased a Chinese workbench from a competitor for comparison.

We only evaluated this one line of workbenches, as North American manufacturers make a reasonably high quality product.

This and the next eight photos show the condition of the bench parts a they were received and removed from the packages. I received similar damage when I bought one of their benches three years ago. I asked for replacement parts at that time, but received them damaged too.

A. Small and medium sized scrape or dent on edge of top and a long scratch in the paint. 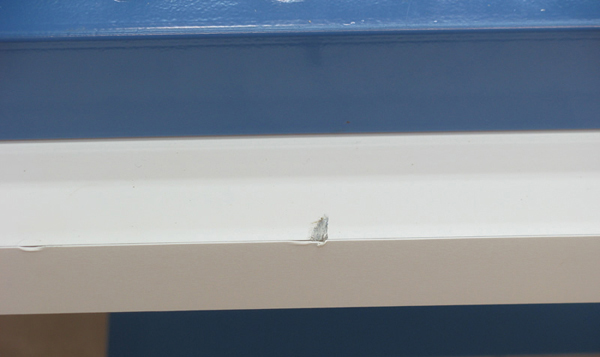 B. Just a small chip and a bent-out piece of laminate. Real laminate does not bend. It snaps. This is a soft laminate from China which will stain easily.

C. Another long edge with an impact. 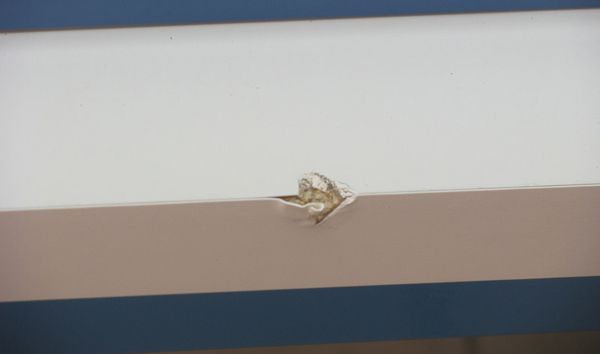 D. This is another damaged corner. 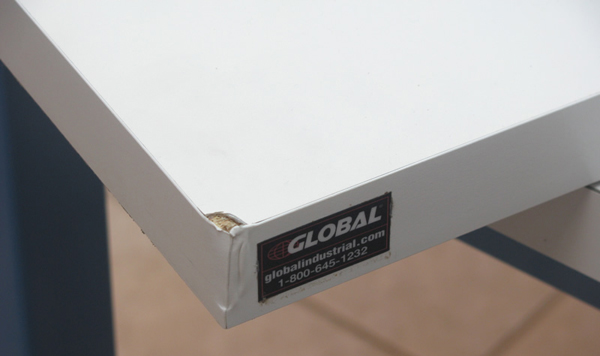 E. Inadequate packaging and thin paint, plus the use of UPS* contributed to the legs having their paint rubbed off in some spots. The parallel lines are where the box did not rub the thin paint through, but got started. There is a dent visible here too. There were a few other small ones, and three of the pieces of tubing were bent. 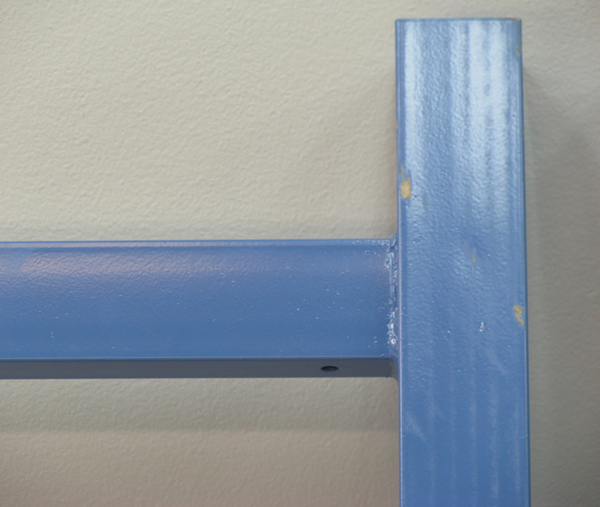 F. An impact on the end of the open tube during shipping forced it to bend against the other tube. I'm not sure what ripped the tube in the corner. You can also see some "box rub" down on the side of the leg. 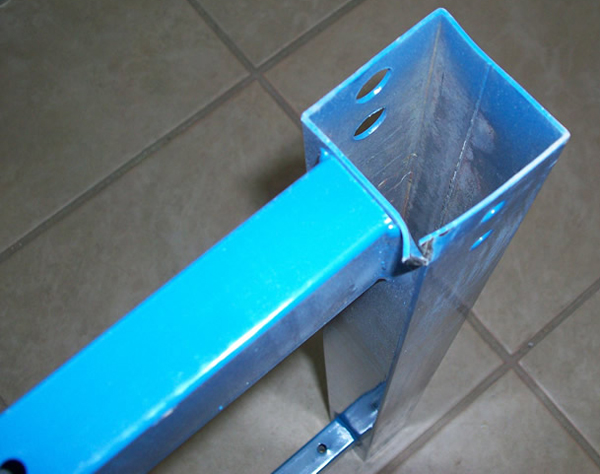 A. This is something I have never seen before. Apparently they welded two scraps together. It is also bent a little at the seam, but that's another subject. 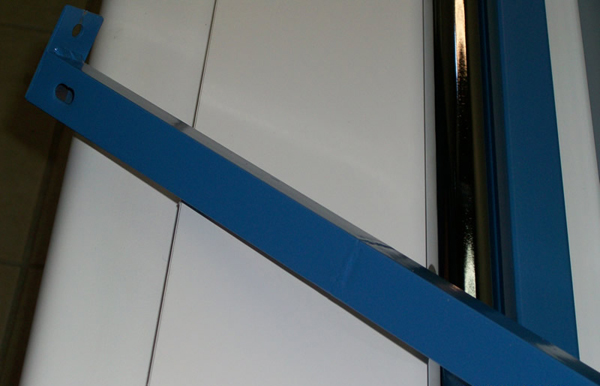 3. We checked the static control top for conductivity and continuity.

Initially, the conductivity of this static control top was well within nationally accepted standards when measured from the top, the sides, and the bottom. Their design also provided conductivity from the top to the frame, but did not include wrist strap jack receptors, grounding wires or grounding lugs.

We did two tests at the test lab at our plant to determine whether the top would maintain its dissipative qualities and its continuity.

A. Continuity between the top and the frame was lost by washing the underside of the top.

B. The surface resistance of the top, while still remaining within nationally acceptable standards, became approximately four times less dissipative after being washed and dried twice with Windex™ on successive days.

C. Further tests found that their Chinese laminate did not have a conductive carbon layer. It used a plasticizer to maintain conductivity. Washing removes plasticizer oils. This system to make materials dissipative depends on the plasticizer coming to the surface to achieve a proper level of dissipation. Over time, the oils depleat, leaving the plastic no longer dissipative.

D. We further determined that their plastic covered tops are not covered in plastic laminates, as all other brands are. (The word laminate representing a product which is made up of sheets laminated together under presssure and high temperature). They use what appears to be abs plastic which is an extruded product. Abs plastic melts at a much lower temperature, wears poorly and stains easily. 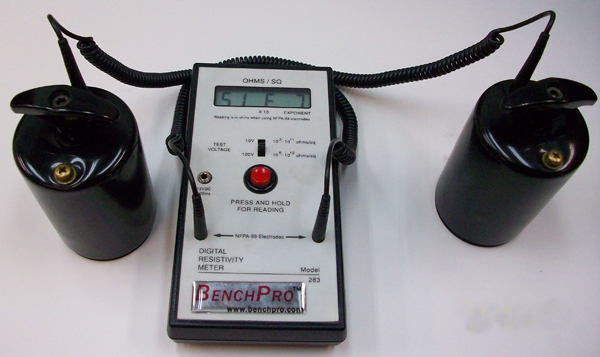 There are four glides on the left side of the picture. Our glides are already installed in the legs.

There are three tubes with holes in them in the foreground. Those are 3 of the adjustable legs. Our adjustable legs are ready to use, and are already installed inside the legs.

The long thin wood screws in the middle are for attaching the frame to the correct position under the top. Our frame comes all welded and attached to the top.

Our leg and top assembly bolts are concealed to reduce personal injury. Theirs are on the outside of the steel tubes.

This shows how many fasteners needed for a simple bench with a drawer. 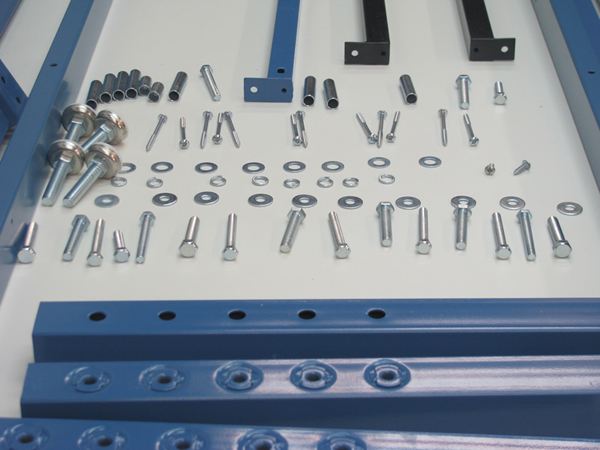 These two photos show two of the four adjustable leg inserts with their bolts screwed in slightly. If you look closely, some of the bolts are so crooked that they will not easily pass through the holes.

It appears as though customers may not be able to get some of the screws in without straightening the internal fasteners. 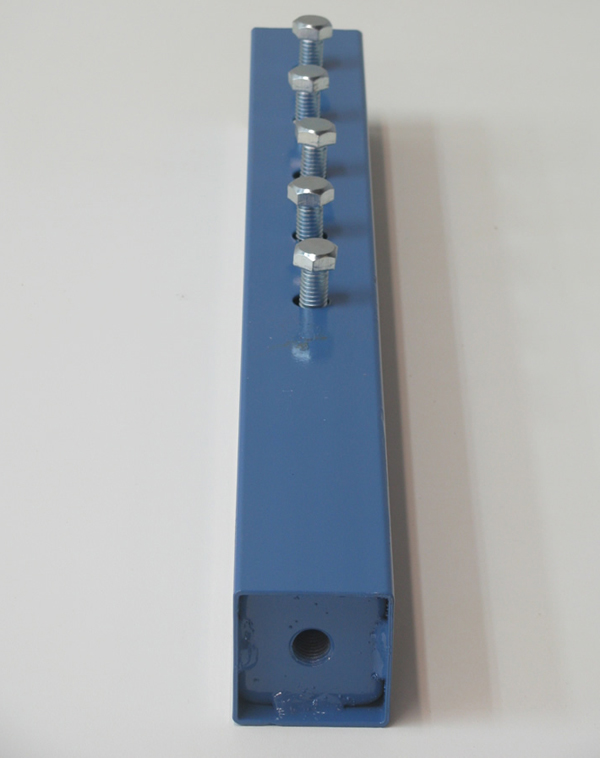 Global sent our (single) bench by UPS* in 5-6 shipments. Legs here, a top there, drawers in another box, and another box with all the long pieces. The shipments came in over a span of 5-6 days, as the components arrived from their various warehouses. 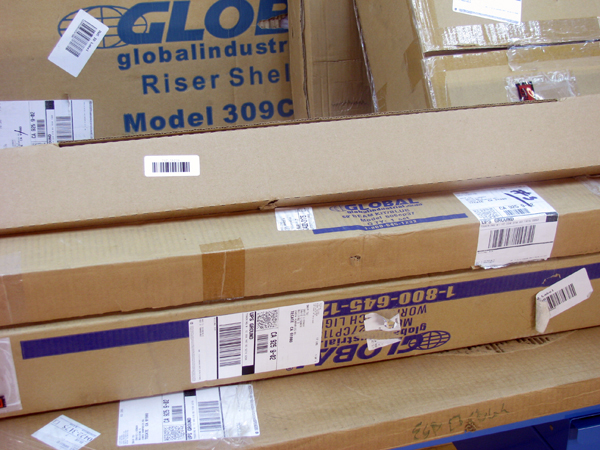